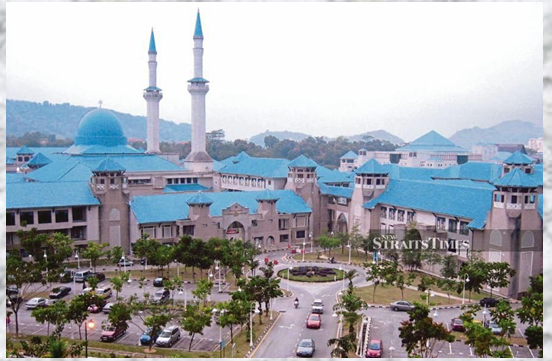 The International Islamic University of Malaysia (IIUM) created history last week when it was awarded the prestigious Green Gown International Award for the 2020 Sustainability Institution of the Year. This was announced in conjunction of the UN High Level Political Forum on Sustainable Development, July 8th, in New York.

The feat honoured IIUM as the first Malaysian recipient, also being the first in Asia as well as the Muslim world. IIUM was listed among eight other finalists among universities from Australia, Britain, Columbia, Mexico, the Philippines and Peru.

It reaffirms IIUM’s resolve to make a difference in the transforming the university based on the whole-of-institution approach. The Sustainability Institution of the Year category “recognizes sustained, whole-institution commitment and impact to becoming a sustainable organization,” with emphasis on at least three key areas: Leadership and Governance; Learning, Teaching and Research; and Partnership and Engagement.

The International Green Gown Award is supported by UN Environment and are open to any university or college across the world. It embraces the “exceptional sustainability initiatives being undertaken by the world’s universities and colleges,” and “set the bar and put every learning institution at the heart of delivering the UN Global Goals.”

This is further enhanced by working in partnership with four major academic organisations worldwide, including The Association of Commonwealth Universities (ACU) L’Agence universitaire de la Francophonie (AUF), the International Association of Universities (IAU) and the Higher Education Sustainability Initiative (HESI).

The Awards are administered by The Alliance of Sustainability Leadership in Education (EAUC) and governed by a local cross agency steering group. This marked a very great departure from several others that used “sustainability” as a commercially-driven ranking exercise. As a result, it skewed and distorted the meaning and aim of sustainability as a development tool to mainstream Education for Sustainable Development (ESD) under the purview of the UN Education 2030 agenda.

It therefore provides global benchmarks for excellence and are aligned with the UN Sustainable Development Goals (SDGs, 2016-2030 ). Established in 2004, the Green Gown initiatives move the sustainability agenda up by becoming “the most prestigious recognition of best practice within the further and higher education sector.

Since then it grows every year and have an increasing international presence, especially following the introduction of the 6 United Nations Environment Programme regions (Africa, Asia and the Pacific, Europe, Latin America and the Caribbean, North America and West Asia) known collectively as the GUPES Green Gown Awards.

The judging panel composed of the specialists from the sustainability and higher education fields, representing organisations such as EAUC, ACU, UN Environment, and the Institution of Environmental Sciences.

Indeed, several universities from the developing countries were also among the top in the other categories like Benefiting Society, and Student Engagement. Some made it to the topmost. For example, for 2020, Universidad San Ignacio de Loyola, Peru for the former, while Facens University in Brazil and University of Strathclyde, UK made it for the latter. Similarly, for previous years.

This inclusive trend is a far cry from the commercially-driven ranking exercise where more often than not universities from developing countries are not among the top, let alone the topmost. Usually, the “winners” among the top five hardly change, year by year.

The reasons for this are plenty, putting developing countries at a disadvantage to start off with. Especially in commercial terms as reflected by their academic handicaps.

Some term it as the “elitism” phenomenon. On the contrary, universities in developing countries tend to be more egalitarian in their approach, and thus adopted a development framework instead.

In April, IIUM was officially acknowledged by the United Nations University as the Regional Centre of Expertise on Education for Sustainable Development making it the first Islamic university to receive such an honour. Like the International Green Gown Award, this goes well with the IIUM vision and mission where the former reads: contributing to the improvement and up-grading of the qualities of human life and civilisation (rarely mentioned in modern universities) which is very much in line to the overarching SDG goals of 5Ps – Planet, People, Prosperity, Peace and Partnership.

More specifically, the second mission of IIUM speaks about producing agents of change of “comprehensive and balanced progress as well as sustainable development in Malaysia and in the Muslim world.” Whereas mission number 6, “intercultural understanding” as well as to “foster civilisation dialogues in Malaysia as well as across communities and nations,” with “a deep sense of social responsibility among staff and students” (as in mission number 7).

All these augur well within the global context of Sustainability in the Education 2030. Kudos IIUM for impressive performance.