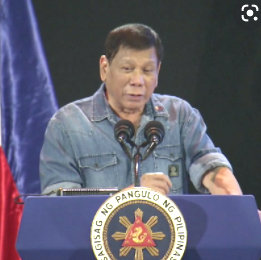 COTABATO CITY – President Rodrigo Duterte has called for peaceful and free elections in the country, mentioning particularly the provinces of Sultan Kudarat and Manguindanao and this city, even as he warned to use the military to help secure fair political exercises.

The governor-husband’s focus in Maguindanao surfaced as he announced plan to transfer residence to the province and seek appointment in the Bangsamoro Transition Authority (BTA) purportedly to help shape the governance of the Bangsamoro Autonomous Region in Muslim Mindanao (BARMM).

“UBJP and its ruling officials in BARMM advocate ‘moral governance” and other Islamic tenets in public service against violence or repressive methods of selecting leaders. We honor the covenant and by Allah (s.w.t.), we shall live by it,” a key party official, who asked for anonymity for lack of authority to speak for UBJP, said.

Though acknowledging that Muslims “have already gone to the flowering of civilization,” President Duterte said he will not hesitate to use the military to quell violent actions to preserve the sanctity of ballots.

“Either we have an election that is free or I will use the military to ensure free and orderly election is free. The military is the guardian of our country and I could call them anytime to see to it that people are protected and elections are freely and orderly exercised,” he pointed out.

The President said he would call “all of you (political leaders and candidates in Maguindanao, Sultan Kudarat, and in Cotabato City) in my office.”

“Wala tayong common ground (to discuss but for free polls), all leaders, political leaders and those participating in the elections, I plead for peace. Gusto ko sana Makita ang Maguindanao, Sultan Kudarat and every province, Cotabato City, na walang gulo,” he said.

He added: “I am hesitant to say that in the forthcoming elections I am still the President, just like in the last elections (in 2019). During my term, there will be peaceful elections. So ‘di pwede yang terrorism and Cotabato has come to the age of development.”

Three UBJP officials interviewed by the Philippine Muslim Today news over the phone welcomed the Presidential plea and warning, saying the remarks if abided by in the 2022 elections could make a “lot of difference for good.”

But one of them lamented that the President could have listened to “wrong briefing” by political quarters that tried but failed “desperately to prevent the processes leading to the just-approved Congressional bill postponing the 2022 polls for (regional parliament members) and extending the BTA term to 2025.”

A day after of the Presidential visit, Sultan Kudarat Gov. Mangudadatu and wife-Maguindanao Gov. Mariam Sangki convened partners in the “Family Alliance” to announce the latter’s bid for reelection in tandem with Ainee Limbona-Sinsuat, wife of incumbent three-term Vice Governor Lester Sinsuat who will run for mayor.

On the other hand, UBJP and BARMM chieftain Ebrahim swore in Rep. Mangudadatu and former three-term Rep. Bai Sandra Sema as candidates for governor and vice governor, respectively.

The “Family Alliance” fielded incumbent Datu Paglas vice Mayor Mohammad “Tong” Paglas, a UBJP field official, as candidate for Maguindanao’s 2nd Congressional district. The UBJP did not name its bet for the slot yet.