It started deceptively as Kandori, Sadaqa or charity, and 3in1 or the package lately. You name it. As the election finally concluded, there were only a few victors and many losers at the same time. I’m sorry but no matter how we passionately address the latter, it’s the same result: LOSS. It won’t change the narrative. They have to get up stronger, learn from the past, and continue living the way it is; it’s not the end. There is always light at the end of the tunnel.

Ironically, the flame of the calls against vote-buying being Haram and immoral from different sectors and stakeholders went off as the election ended. And then it will suddenly come to life anew in the next election. Thus, it is less effective by then since the advocacy is not that consistent; it just flows where the river heads or “go in one ear and out the other” status quo.

It’s astonishing that the poorest province of the Philippines statistically – though some have categorically denied it and seen it as a disgrace to the whole Mranaw – has the highest rate of vote-buying practice that significantly made us headlines all over the country in the past few days: Butig, Binidayan, Malabang, and those who silently blacklisted other candidates in their own Kingdom.

To that, I would submit to the statistics that we are indeed the poorest among the poor – if not literally then collectively yes as a society – when the stomachs are rather cemented temporarily and served deceitfully instead of the roads that cause convenience to the majority for a long time and ease the run of the businesses. And for that, it makes me doubtful: If Barack Obama and Sadiq Khan were one of us, would they still be able to reach the pinnacle of success in the world of politics!

This practice is indeed one of the forms of bribery that was foreign to our ancestors yet they knew back in time that our lands gradually slipped away at the hands of the fewest then who first succumbed to the corruption introduced by the colonizers in which we are now treated as mere strangers. In this case, let us visit the evolution of vote-buying in our society from my perspective. If we look at it, we can see there are two factors supporting its existence.

First, vote-buying as a part of the process, meaning it has been slowly built up at all levels of the system over the years. It is worth remembering when it was first brought in to us back in the early 90s wherein the clash existed between the vote-buying mechanism and the platforms backed up with the trust of the people at its peak, and the latter prevailed eventually. Unfortunately, we as people are only blamed for the survival of this immoral act, but we are just a small part of it, and yet many forget to point out and criticize those actions driven by bribery at the hands of the officials from the top to the lowest during the election.

Second, vote-buying as a product of the Palakasan system fueled by either blood or money since the enactment of the now-defunct ARMM, in which we still hope and pray hard that it can be minimized the least through the leadership of BARMM under Moral Government advocacy. As we all know that 90% of professions in the region are teaching, most of the parents, prospective teachers, and even regularized teachers – if not all – have nearly lost the faith in the nobility of teachings because they have been drowned in the deepest sea of debts just to secure an appointment; and worst is for those who got only debts without any appointment. In return, people lose their trust in the system and thus are always tempted to vote in the name of money and those who are to facilitate vote-buying and bribery one way or the other.

In conclusion, all this happens because the spirit of the trust in each of us has been buried by the Palakasan system.  Prophet Muhammad (Peace Be Upon Him) has guided us on how to gain the trust of the people: When a lady from a prominent family in Madina committed a crime punishable by Hand-Cutting (Hăd) at the time Islamic government has just been institutionalized, a group of companions came asking him a favor to look for other options, he then turned to them fiercely swearing to the almighty Allah that “If Fatima, his lovely daughter, had stolen he would surely cut her hand.” He cautioned that for such practice (Selective Justice), ancient people have been destroyed. And there, the root of the Palakasan system had been cut off. TRUST had been earned from Muslims and non-Muslims consequently. 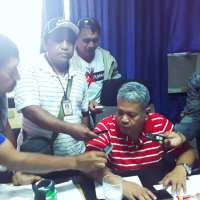